The Alpenrose velodrome has played an important role in my life. I’m sad to see him go

Mateen Richey is an aspiring 18-year-old professional cyclist who was born and raised in northeast Portland. He previously shared a recap of a ride with a group he helped found, BikePOCNW. 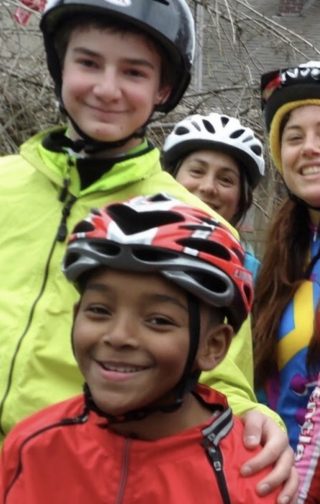 Richey first visited the velodrome at the age of eight.

The Alpenrose velodrome has played an important role in my life. I’m sad to see the trail go. I hope my story does it justice.

My fond memories of Alpenrose Velodrome started across town at the Blazer Boys and Girls Club in North Portland, where an after-school cycling program called “Rollers 101” was my favorite class. One day, club manager Tim Sicocan announced to our third grade class: “A van is going to the velodrome.” I got on board with no idea what to see.

As we approached the place, a feeling of dread leapt into my heart. It was unlike anything I had seen before. A canyon of shiny concrete painted in colorful stripes opened before us. A rail encircled the chasm and supported contrasting panels and boldly painted flags. It was a huge bowl of publicity. Somehow we were supposed to ride bikes on it.

At eight, I was too nervous to climb the wall. There was no way I was going up there. I couldn’t, and I wouldn’t until almost six years later.

As if we were on another planet, the only faces I was familiar with were my friends in the van and our coaches at the Boys and Girls Club. Mostly high school mentors and a middle-aged person shouting invitations to descend to the “apron” around the “infield” at the bottom of the cavernous walls.

On this first day, everything was easy. We rode in pacelines and did BMX on the flat part. 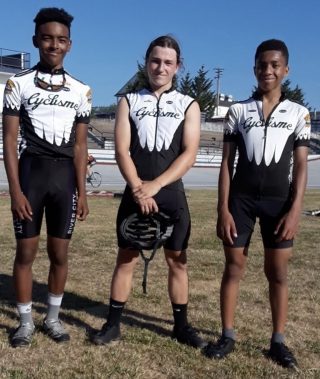 A young (uh) Richey (left) and some friends.
(Photos: courtesy of Mateen Richey)

When calling us they gave us rules for the games which taught track etiquette. Pacelines were practiced on foot by walking in a line. Some children rode their bikes and tried to run on a wall. They encouraged us to play without pressure.

After awhile, we all walked up the hill above corner three to do yoga and have lunch. Yoga was led by high school students. We did what they did. Then they served us sandwiches and Subway juices. We thought these guys were so cool!

Today, I recognize that Alpenrose Velodrome is a bastion of Portland’s old glory. Unfortunately, I don’t remember that it is the story. My experience is small compared to the pantheon of stars who have raced and trained there. In a 1968 photo I saw that the colors on the concrete surface were blue and red, and the Olympian Steve maarenen ran for gold on this surface.

I was not there to see Leslie Barczewski winning the national track championships in ’71. ‘I wasn’t there to watch the local TV stations filming and the spectators applauding either. I would have loved to witness Alpenrose Dairy workers pulling out their large fridge filled with Alpenrose ice cream!

Our disjointed little squad began to gel as a team. It was the first time that I felt we could play the role of a strategic unit. We were a machine in search of victory.

It just wasn’t my time, but I know I owe them my time. Thanks to Franz Pauwels and to everyone who came before me. My time included much smaller crowds, slightly slower runners, and a lot of cyclocross. Thanks Darryl Provencher, Tom Orth and Dylan Wiggins, to name a few.

When I was 15, I competed in my first Oregon Bicycle Racing Association Junior Track Championship. In the weeks leading up to that, I spent a lot of time on the track preparing for my time trial, team pursuit and mass start races. It didn’t take long for me to jump into the OBRA Championships.

On the day of the championships, hanging out in the infield, we were ready. Bicycles hanging from our pop-up tent, ice chests filled with cold drinks and ready to sit. We had yoga mats and folding chairs.

Looking back, I’m glad we had all this solace in the tent, because the race almost killed me. It was the hardest race of my life. The elite Jerry Baker Junior Racing team was there. McKenna Mckee and Karl Pratis were so fast! McKenna is probably an Oregon Hall of Fame caliber runner. She had just taken all the money from older women in major professional track races along the West Coast, including the Alpenrose Velodrome Challenge.

Later that day our team ran the 500 meter time trial, then the 2 kilometer pursuit, then the junior sprints. My young teammate Joshua Morris finished first in his age category in the 500m and 2km. Our oldest junior, Tasman Alexander, a fixie from Lincoln High School, won the 2km pursuit in a surprise demonstration against the elites. In my 14-15 age division, I won the OBRA jersey for the 2K time trial.

These championships have become life changing events for our little junior team. In the coming weeks we would be competing in the Junior Track Cup Scratch races on Tuesday and the Category 4/5 men’s points races in the evening on Thursday. Our disjointed little squad began to gel as a team. It was the first time that I felt we could play the role of a strategic unit. We started to recognize each other as real teammates. Each of us was an expert. We were a machine in search of victory.

Joshua could escape and I could counterattack when they caught up to him, then stay there for a few laps. Tazman sprinted with the finishers, then held on.

It was a great strategy. It put us in the junior riders with the older men. When we ran the men in the 4 / 5s our strategy was to put Tasman 2nd or 3rd on the weekly podium. The men complimented us after the races.

Good things were happening to me in Alpenrose. In my first year in high school, Tom Orth, a race promoter, hired me to set up the timing clocks and starting mechanisms. It was the highest paying job I have ever had. Walking around with electrical chords and sound equipment has made you the third most official person on the court before the races. Behind the OBRA Official and The Promoter, the guy who set the clocks to time the finish, was essential.

Alpenrose was a place that encouraged me to be brave, to work hard, to dream of college and believe I could make it happen. One evening, after making my to-do list for Tom, I spoke to a runner my trainer had chosen from some beginners. We talked about training to win an upcoming two-man time trial. The name of the rider was Chad Klaas.

Chad Klaas was a 20 year old roughly the same speed as I was about to return to college in Dartmouth. My trainer asked his dad to install 48 × 15 equipment like mine on his son’s bike. From there, Chad and I cycled at the same pace. We have evolved in a synchronized manner on the track. Chad was heading to the Ivy League and I was his lead man. One way or another, we are both headed for victory!

Even crossing the mud covered track I learned from Alpenrose.

Chad and I were having fun and learning fast. Darell Provencher, a runner over 50, took an interest and ran the team pursuit with us. Darrel gave me a special “trail bag” to carry my trays and tools. My top speed doubled during those few weeks that summer.

Alpenrose velodrome taught me a thousand lessons; like sometimes winning was not everything. And you can have a good time during a race while finishing at the back of the peloton. I discovered it not during a track race, but during a Cross Crusade cyclocross race in the winter.

It was a warmer winter day. Everything was going well until the start of the race. I lined up with the elite juniors behind the 1/2/3 men category and the race started out too hot for me. Everyone was flying the course at breakneck speed. My bike was also slowed down by a freshly messed up derailleur. After changing my bike, I quickly found myself in the back.

Soon I was caught by a locally renowned adult cyclist, Dylan Wiggins. Dylan challenged me for a friendly competitive race in our two separate races. I saw his camera and knew he was recording. So I decided to have fun. Our racing moment was as spicy and risky as ever. By clowning with Dylan, I started to catch up with the juniors who had let me down before. I found a way not to give up and to drive even faster.

Even crossing the mud covered track I learned from Alpenrose.

Social life counted in this metaphor of life in concrete and in the bank. We trained hard, drove fast, and then slept well. There was yoga at the end of the race. There was food. It was a place that brought hope and order to my life. People were interested in it. The Alpenrose velodrome has put a lot in the legs of the cycling community.

– Mateen Richey, @ Teen503 on Instagram
– Receive our titles in your inbox.
– Support this independent community media with a one-off contribution or a monthly subscription.

Rodeo by bike in Saint-Paris on Monday